Why you should care about Patch Tuesday

If you are a Windows user, you should be familiar with the term "Patch Tuesday." This refers to the second Tuesday of every month—the day that Microsoft releases the latest updates for its Windows operating system (OS).

All software has flaws, a.k.a. bugs. This will always be the case with any automation system created by humans. Many of these bugs create vulnerabilities that can be exploited by bad guys. Believe me, the bad guys are hard at work, day and night, finding these bugs and figuring out ways to take advantage of them and gain control over Windows systems* anywhere and everywhere.

Because all software requires periodic updating, software manufacturers like Microsoft provide software updates ("patches") that must be installed in order to bring systems up-to-date and help protect from unwanted intrusion. Microsoft issues patches on the second Tuesday of every month—a day that has become known as "Patch Tuesday."

A few things to note: First of all, home users want to keep your operating system and software applications patched. This is regardless of the fact that, once in a blue moon, a patch is released that inadvertently breaks another application on your system, like Microsoft Excel or Outlook, for example. Mistakes happen, and these are generally the result of testing failures in the Microsoft test labs. (I know because I worked in one of those labs in the mid-90's.) Think about the millions of computers running Microsoft Windows in a seemingly infinite number of configurations. Not every single case can be tested, but Microsoft is adept at hitting most of them.

Side note: If you're running a business that is reliant upon other Windows applications, you'll want to develop a testing process whereby you test patches before deploying them. The average home user isn't running critical applications and doesn't need to set up special test cases. Regardless, whether you are a home user or a small business owner, you need to understand patching and always have a recent backup in place. We'll talk about backing up your data in another post.

The point is, for home users, experiencing the very rare malfunction caused by patching is not a valid reason to decide you are not going to patch your systems (unless you don't care about being hacked or having your identity stolen). Not patching puts you and your data in a vulnerable position. My mom always said, "Better safe than sorry." Besides, if a Microsoft OS patch breaks an MS-Office product, rest assured it will be discovered and fixed rather quickly.

Secondly, all of this patching is self-automating in Windows by a program called Windows Update, which is a pre-installed component of the Windows OS. Users don't need to lift a finger. Windows Update should be set to "automatically install updates." This is your best bet. To check your settings, go to the Windows Update page.

More advanced users can use these methods to view and change Windows Update settings:
Finally, some (but not all) patch installations require a reboot. Keep an eye out for this important notification—especially after Patch Tuesday—which is visible when you use your mouse pointer or other pointing device to hover over the Shut down function. If your Windows Shut down control shows the "shut down Windows and install updates" icon, as shown in the image here, then that is exactly what you should do.

Additionally, Windows may prompt you to restart in 10 minutes. Save your work and click Restart now. Do exactly what it says. You are able to postpone, but I recommend you restart or shut down (whichever the case may be) as soon as possible. The next time the computer starts up, give it it time to finish installing the updates, if instructed on screen to do so. 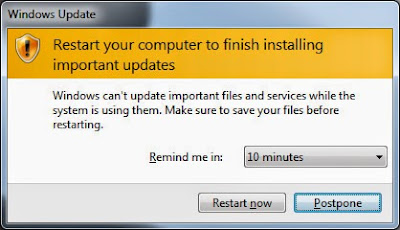 *Computers running on the Apple platform (called iOS) also have bugs; however, Windows systems have a greater market share and therefore are more highly targeted. This doesn't mean that Mac users shouldn't pay heed to software update needs; it just means that I'm not focusing on iOS security in this blog posting.
Posted by Susie at 6:30 AM